I Got Trapped in a Game Park. True Story.

As I approach Day 2 of my countdown to leaving Malawi, I can't help but reminisce a little. I've done really well on the emotional front (minus my mini-Saturday night breakdown) but it's amazing how far I come. I remember how miserable I was during my first few weeks (months, even) here; how I just couldn't navigate my way around a new culture...I now have fond memories of my co-workers dancing around the office and enjoying a candlelit evening when the power is cut (both of which happened yesterday) and somehow making "Malawian life" my life!

My mom and two younger brothers came to visit me in Malawi, where I finally had a chance to show them the life I'd created for myself! Our packed itenirary involved 5 days at the lake (complete with a boat trip to feed the fish eagles) and a 2 day trip to the beautiful Zomba plateau.

We rented a little car (of course I could drive on the other side of the road after watching for 10 months), and naturally, our trip had to involve Malawi's premier national game park to see hippos, elephants, and maybe even a lion! Our first day and night in Liwonde National Park was exquisite, enjoying the luxury of the exclusive (and expensive) Mvuu Lodge. The camp is so exclusive that you have to drive an hour plus into the national game park, during which we saw our first signs of wildife: a huge, galloping Sable Antelope. 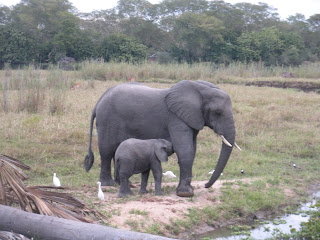 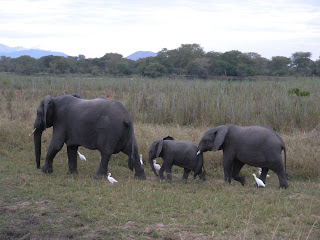 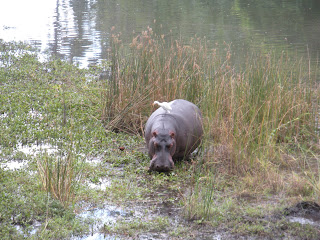 After 24 hours of "living the life," I was prepared to drive back to Lilongwe and finish out our trip. Having learned from our antelope run-in in the little sedan I rented, I drove about 10 km/hour the journey. Around 3:15 pm, after an hour and a half, we were still driving on the rocky roads of the game park, when - in true "it could only happen to a diva" fashion - I heard a loud pop! I got out of the car, and to my chagrin, the situation was grim: a destroyed back tire and a strong smell of fuel (it was later determined that a rock may have punctured the fuel tank). Yikes!

The next few hours were among the most terrifying of my time in Malawi! We called Wilderness Safaris, the company managing the exclusive lodge, and they supposedly contacted the lodge directly for us. I called my office and the car hire company, and no one was concerned initially. But when 5:15 pm came around (just minute before sunset in Malawi at this time of year) - after several follow-ups and no rescue - the panic started to set in. The Lodge Manager wasn't answering - nor could we get through on any of the other 4 numbers - and the Park Ranger number listed was out of operation. Add 2 dead cellphones into the mix just minutes later, and I really thought I was going to sleep in the middle of Liwonde National Park for the night!

I had a brief "ah-hah!" moment and used my USB internet device to send an SOS email (which a co-fellow said he thought was spam after the fact) and reached out to the few people that I knew in Malawi. It was the first instance I realized that I'd made it through a year with no safety net, with no plan of what to do in the case of a serious emergency!

In the end, we were lucky that my mom had her U.S. cellphone, which we used on roaming for the remainder of the evening. We had 3 teams come to the rescuse - my office, who sent a vehicle and reported our situation to the Police and Park Ranger; the car hire company, who brought us a new vehicle; and the $1000/night lodge, who came with the Park Ranger after being contacted by my U.S. diplomat friend. The flat tire was changed, and as we drove the remaining 8 km out of the park, I heard a loud "BRRRRRRRRRRR," followed by...a parade of three elephants. Really.

Since it was pitch black by the time we made it out of the park, the trip unexpectedly ended at a nearby hotel for the night before we hired a driver to get us back to Lilongwe. My family enjoyed one last day in Malawi, before my mom shared, "I love you and am proud of you, Yvette, but it's time to come home!"

Well, that's exactly what will happen in 3 more days but I'm sure I will never forget the evening I got trapped in Liwonde National Park.

Check out my newest blog!

A Little About Me

I am a globetrotter and advocate for social justice. A graduate of the Harvard School of Public Health and MSU Spartan-for-life, I am committed to improving global health and cultural competency in policy and programming worldwide, especially in youth empowerment and the fight against HIV/AIDS. I believe in cross-cultural exchange and information-sharing, speaking my mind, and changing my mind as life presents new experiences and perspectives. This blog represents my thoughts "au moment" and does not reflect the views of my employers or organizational affiliates (though I await the day people pay for my thoughts!). I look forward to engaging in dialogue!

I've Found These Interesting, Maybe You Will Too!